Commenter Mikey Blaze wanted me to write more about horror and it would not be Christmas without mentioning  Silent Night Deadly Night (1984), one of my favorite films of all time (not to be confused with the 2012 film Silent Night).

The film tells the story of Billy Chapman, a little boy who sees his parents killed by  a man dressed as Santa, and when forced by his boss to dress up as Santa on Christmas, goes on a killing spree at the age of 18.

At the start of the film we see five-year-old Billy reading The Night Before Christmas, suggesting the reading level of about a six-year-old.  Since his reading age is 120% his chronological age, this implies an IQ of 120,  at least at the age of five.

His IQ might have gone down after that because he spent the next 13 years being raised in an orphanage, however under the strict discipline of the terrifying Mother Superior, I suspect he got a good education (even though his emotional development was further scarred).  Not that I think education can much affect real intelligence, but it can bias test scores.

Further evidence of Billy’s high IQ is he has the visual-motor ability to kill his coworker with a bow and arrow despite perhaps never using one before, and he has the lateral thinking to kill a naked woman by pinning her to the horns of a reindeer.

On the other hand, Billy’s childlike morality (killing people for having sex because sex is naughty) and extremely short life-span (shot by police at 18) show low IQ, but perhaps these can be excused, given his extreme childhood trauma.

But  Billy may have also inherited low IQ DNA from his psychotic grandpa.  Perhaps grandpa was schizophrenic and Billy would become so too.

In other words, IQ drops about 10 points as one becomes psychotic, so while Billy’s childhood IQ may have been 120, his adult IQ was perhaps 110. Still smarter than 75% of white Americans his age. 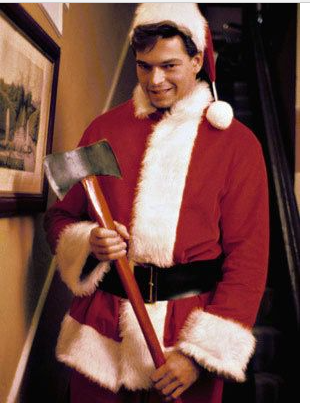 Given Ricky’s bizarre facial expressions and muscular physique, I suspect he was less intelligent than Billy.  Siblings share 50% of their DNA and their IQs correlate +0.5, so Ricky likely regressed to the mean in IQ from Billy’s 110 IQ.  But not to the IQ 100 mean of the general white population, but the IQ 73 mean of the criminally insane white population.

An IQ of 92 would put Ricki Chapman in the bottom 30% of the white Americans his age, explaining why he was the dumbest of the three characters here:

180 thoughts on “Estimating the IQs of Billy & Ricky Chapman”