Please place all off-topic comments in this thread.  They will not be posted in the main article.

On a brighter note, this week Oprah officially became a historical figure with her own massive museum exhibit.

As the first multibillionaire descendent of black slaves, and someone who completely dominated U.S. culture for decades, the exhibit seems overdue.  Back in 1986, the idea of a black woman having the #1 talk show in America was groundbreaking, and it’s amazing to see how racism dropped dramatically during her reign from 1986-2011 (hat-tip to Afro for finding the chart): 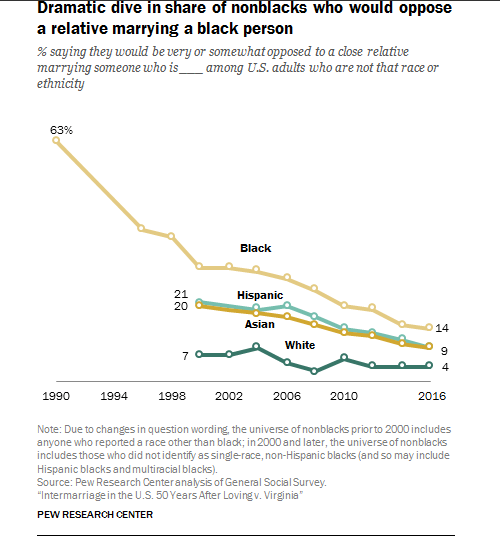 In other news, the trailer for the new Halloween movie is out.  Can’t wait to see this.  Love the fact that it actually looks like Fall in the Midwest (not like in the original which was filmed in Pasadena, California) and love the fact that Myers has been in a mental hospital in the 40 years since the original film ended.

I wonder if it would have been possible to administer him an IQ test (a non-verbal one since he doesn’t talk or read, but perhaps he could point to right answers or manipulate blocks-though his motor movements are slow as hell). The closet scene and the end of the trailer is freaky.

Finally, a fascinating discussion between Joe Rogan and Roseanne: