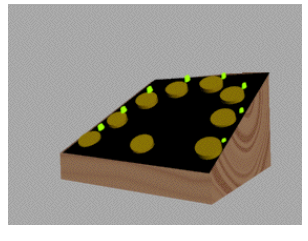 The correlation between IQ and reaction gets stronger still when it becomes choice reaction time.  Here for example, three lights might flash, and you must press the button of the light most distant from the other two.

On page 165 of Clocking the Mind Arthur Jensen writes:

In a truly random sample of 900 middle-aged adults (age around 56 years) in Scotland, the observed RT-IQ correlation for simple RT and 4-choice RT were -0.31 and -0.49 respectively.  This sample included the full range of IQs in the population, the distribution of both RT and IQ were close to normal (perfectly Gaussian for the middle 95% of the distribution), and the RT-IQ correlations did not differ significantly between subgroups defined by age, social class, education and error rates in the 4-choice RT

High IQ minds not only show faster reaction times, but more consistent ones too.  Indeed when you take a composite score of the speed and variability of RT across a wide range of elementary cognitive tasks, you get a 0.67 correlation with IQ.  However Jensen notes on page 229 of The g Factor that this correlation is based on college kids who have a restricted range of IQ and when you correct for this, the correlation becomes at least 0.77! And if composite RT measures correlate 0.77 with IQ, they might correlate as high as 0.9 with a hypothetically pure measure of g (general intelligence).

Critics might argue that even such a high correlation proves nothing, since it only reflects exposure to video games and other middle class amenities. It’s certainly true that RT, especially complex RT can be influenced by practice, however on page 244 of Jensen’s The g Factor, he notes that even when everyone has a chance to practice their RTs until practice effects plateau, the correlation with IQ only diminishes by 15%.  So instead of the g loading for composite RT measures being 0.9, it’s likely around 0.77 after everyone’s had a change to maximize performance, which is still higher than many psychometric IQ tests!

And if composite RT scores were carefully combined with other neurological variables like MRI in vivo brain size, the g loading could exceed 0.8.

In Clocking the Mind, Jensen dreamed of a World where you go to your doctor and along with measuring your height, weight, heart rate and blood pressure, you’re also given a routine RT test.  You would practice until performance plateaus and this would serve as your baseline against which a sudden decline in speed and consistency might signal dementia.  One advantage of chronometric testing is that unlike psychometric IQ tests, measures of RT can be repeated as many times as desired without invalidating the measure.

Another advantage of RT is it’s much harder to fake cognitive disability to escape criminal responsibility because fake slow RTs are so conspicuously slow, they are outside even the impaired range.

Of course as commenter Race Realist would say, correlation does not equal causation, so we don’t know whether RT is causing IQ, IQ is causing RT, or if some other variable is causing both.  But as commenter Mug of Pee implied, the litmus test for causation is “preceding in time” and omnipresent.  It’s hard to prove RT comes earlier in time than IQ does unless there are some infant RT tests, but there is evidence that the correlation occurs even within the same family, suggesting some degree of omnipresence.

The next step in proving causation is showing the RT-IQ correlation exists in every country.  One problem is the correlation was lacking in a sample of South African blacks however Jensen argues this was because the IQ test given had too little variance in that sample.

Ultimately evidence for RT causing IQ comes from the failure of any other way to explain the correlation.  Some have suggested the correlation is caused by health, practice or social class, but the correlation would likely hold even with these variables controlled.