It’s a common view among Afrocentrists that the black skinned aboriginals of much of Oceania and South Asia are part of the same black race as sub-Saharan Africans.  Educated people tend to dismiss this as absurd pseudoscience because if you look at the modern human branch of the phylogenetic tree below, you’ll notice that Africans are anything but related to Oceanians. 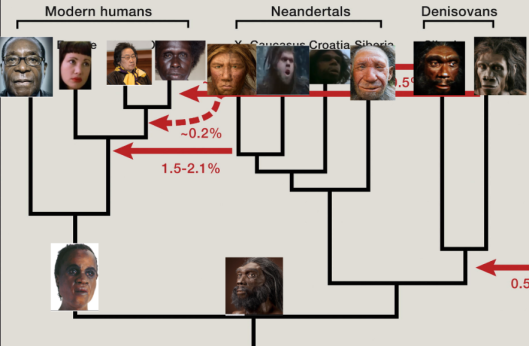 Notice how the African man and the Oceanian woman (pictured below) are the two most distantly related living modern people on the above tree, even though they’re the two who look the most alike. 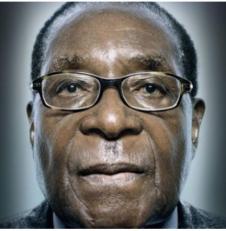 And notice how the East Asian woman and the Oceanian woman are the two most closely related living modern people on the above tree, even though they’re the two who look the least alike and have evolved to opposite climate extremes.

Before scientists knew about DNA, they would have grouped the Oceanian with the African which makes a lot more sense intuitively, and yet today we’re told by academic elites to ignore our instincts and listen to the DNA.  This is a classic example of how a little knowledge is a dangerous thing, and when it comes to DNA, even experts know only enough to draw the wrong taxonomic conclusions.

It turns out that although genetic similarity is a good measure of how recently you shared a common ancestor with someone, it’s a poor measure of how much you resemble them biologically.  The reason is, evolution needn’t change very much of the genome to create a new race, or even a radically new kind of species, yet at the same time, huge changes in  millions of trivial parts of the genome have virtually no effect.  As Scientific American notes “the secret is to have rapid change occur in sites where those changes make an important difference in an organism’s functioning.”

So my humble advice for biologists is to forget all about genetic similarity when grouping organisms into taxanomic categories like species, genus, or even race, and instead just look at morphology like they used to in the 19th century, because attempts to sort life forms by DNA leads to absurdity.  Take the phylogenetic tree above: notice that one of the earliest modern humans (mitochondrial Eve pictured below) is closer on the tree to homo heidelbergensis (a sub-human primate pictured to Eve’s right, below) than she is to the living modern women from East Asia and Oceania, even though the latter are part of her species and the former is not.

This is because genetic similarity, especially neutral genetic similarity (genes that are not selected for) serves as a molecular clock telling us how long since two individuals shared a common ancestor, but it tells us little about how much of the actual phenotype of that common ancestor they both still share genetically.  It’s the latter that should be used to group organisms into taxonomic categories, not the former.

Failing to grasp this concept is leading to all kinds of absurdities.  Many years ago I was horrified to learn that many scientists are now classifying humans as a type of ape.  I know humans are primates, but surely we’re not apes.  We don’t swing from trees, or have fur, or prognathous faces, and unlike apes, we speak, walk on two legs, write novels, use computers and go to the moon.  Surely there’s a quantum leap between humans and apes and no one with any common sense would put us in that category.

“Nope,” said the scientists, “we’re apes.  We’re close to them of the phylogenetic tree.”

“Yes,” I tried to explain, “but that’s only because we share an ancestor with them recently.  The phylogenetic tree only measures time since divergence, it doesn’t measure how much meaningful change occurred in that time.”

According to the famous pediatrician Hans Asperger, a dash of autism is needed to be a good scientist, but with autism comes communication difficulties and a lack of social awareness,  and classifying humans as apes is a linguistic travesty that discredits the entire field of biology.

One of these things is not like the others

Another borderline autistic decision occurred when scientists decided to classify birds as dinosaurs, once again focusing myopically on the phylogenetic tree and ignoring the amount of meaningful change that has occurred between the two types of animals.

86 thoughts on “The problem with taxonomy”