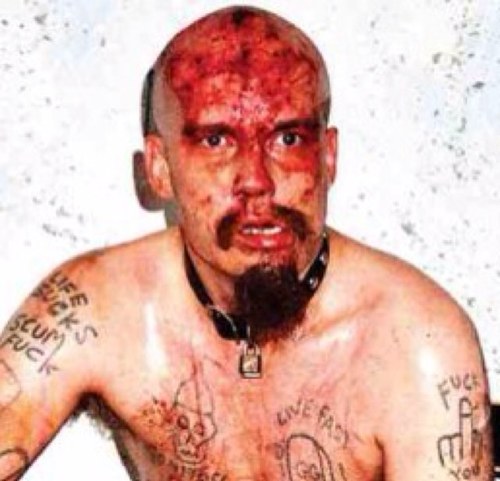 I haven’t forgotten about reader requests to estimate the IQs of Eminem, Ben Shapiro, the Founding Fathers or even Clark Ashton Smith, but with Halloween only weeks away, I wanted to write a quick post about GG Allin while he’s still fresh in my memory (hat-tip to commenter jeanbedelbokassa for suggesting this person).

In studying GG Allin over the past week or so, I was struck by his claim that if he hadn’t been an entertainer, he would have been a serial killer and was reportedly friends with John Wayne Gacy.  Of course I should stress that I’m in no way equating an artist like GG to an actual killer, but there are aspects of GG’s childhood and adult persona that remind me of some of the most grotesque murderers in recent history.

In an interview with Vanity Fair, Zombie explained what he knew about serial killers:

I love ’em all. Not, you know, as people or anything, but they all make for great stories. I think Henry Lee Lucas is probably one of my favorites.

He and his buddy Ottis Toole were just a couple of deranged rednecks. But given his upbringing, y’know, it’s just not that surprising. Some of these guys, you think, “What would make a person do something like this?” And then you read about their upbringing and you’re like, “Oh, okay, well I guess that might do it.”

I’ve read so many books about these guys, I start confusing their backstories. But with Henry and Ottis, I remember it was pretty horrible. Stripper moms, alcoholic dads, I think they were both forced to dress up like girls at some point.  Henry killed his mom and raped her corpse, and Ottis had a thing for arson and cannibalism. They were into some really perverted stuff, like having sex with dead animals and that kinda thing.

Compare these descriptions with GG Allen, who was raised in the woods without running water or electricity, with a father so mentally ill, he reportedly named his son Jesus, because he had a vision of Jesus asking him to (the name got changed to GG). In school GG was bullied by other kids, and by high school would start dressing like a girl (shocking for the time period).

Like Lucas and Toole, GG would engage in the most sexually perverse of behavior such as self-reportedly raping people on stage (never confirmed), defecating on stage and throwing it at the audience, and shoving bananas into the most disgusting parts of his body and then eating them.  In preparing for this post, I watched a documentary about him and it was so disturbing, I couldn’t even look at the screen and felt physically nauseous for hours afterwards.

In other words, GG, who says he would have been a serial killer, is very much of that ilk, both behaviorally and biographically, and the most depraved of serial killers, seem to average IQ 80.  Note, I’m not talking about all serial killers, just the really perverted ones, since the same prenatal brain damage that causes paraphilias, also tends to lower IQ.

And yet GG did not become a killer, but rather an extremely successful man, who at his peak, claimed to have a million followers.  Such fame and adulation, surely made him more powerful than many city mayors, though not quite as powerful as a U.S. congressman, governor, or national media personality.

So instead of GG’s IQ being 60 points above 80, he’d likely be about 24 points above 80, or IQ 104.  This is consistent with a psychologist who interviewed him in prison and found his intelligence to be at least average (hat-tip to the omniscient ruhkukah).

Because the demographic prediction made above has such a large standard error, it must be substantiated by historiometric evidence to be at all credible.  Although historiometric IQs have been ridiculed, when competently done, they are perhaps one of the most important concepts in social science.

When I first read that GG had repeated the third grade, I didn’t give it much weight because judging by his adult persona, I assume he was a rebellious kid who constantly misbehaved.  When interviewed, his mother confirmed that young GG simply didn’t care about school, but what she also said was that it was her decision to have him repeat the third grade because he was getting so far behind the other kids.

This implies that had GG taken a scholastic achievement test at age nine, he probably would have scored like an average white eight-year-old (since he was a year behind), thus implying a ratio IQ equivalent of 89  (8/9 = 0.89). This is considerably lower than the crude demographic prediction of 104 (white norms).

The website ggallin.com claims to have original art work drawn by GG.  This was an excellent opportunity for me to score GG on Florence Goodenough’s legendary Draw-A-Man IQ test, which was revised by Dale Harris in 1963.  The test aimed not to measure artistic talent, but basic knowledge of the human body, which serves as a rough and ready measure of intelligence.

The smoothed mean and standard deviation for American fifteen-year-olds (considered roughly adult level on tests like this) was 45.2 and 9.83 respectively, making GG’s score 1.51 SD above the mean (IQ 123, U.S. norms; about 122, white norms).  However because the norms were from fifteen-year-olds circa 1963, they belonged to a birth cohort eight years older than GG’s.

According to scholar Richard Lynn, scores on the Draw-A-Man test become inflated at a rate of 3 points per decade (see The Flynn effect), which means GG would have scored 2.4 points lower if compared to his actual birth cohort, so we must reduce his IQ on this test to about 120 (white norms).

Historiometric evidence suggests GG would have scored an IQ equivalent of 89 on a childhood scholastic achievement test, and when his drawing was scored on The Draw-A-Man test, he clocked in at IQ 120.

The Draw-A-Man test correlates between 0.48 to 0.72 with the Stanford Binet (Harris, 1963, pg 96).  Assuming it also correlates about 0.6 with measures of scholastic achievement, which are essentially IQ tests in populations with similar schooling, then someone with a scholastic IQ of 88, and a Draw-A-Man IQ of 120, would have a composite IQ of 105 (white norms).  This is consistent with both the demographic prediction and with the opinion of the psychologist who interviewed him, however given the speculative nature of historiometrics, combined with the mediocre validity of the Draw-A-Man IQ test, this should only be considered a crude estimate.