Evidence continues to debunk the popular idea that IQ is largely irrelevant to success above 120, and my less successful readers are going absolutely ballistic. The reason this idea is so popular (and its debunking so threatening) is that the internet is crawling with people who are either only moderately intelligent or only moderately successful; and they take comfort in believing they achieved their modest success by being way smarter than the homeless guy on the street, but hysteria ensues if you suggest that some gazillionaire pizza mogul is richer than they are because of brains. Thus, these self-serving elitist snobs want IQ and money to be correlated, but only up to either their level of money or their level of IQ (whichever comes first). This allows them to feel intellectually superior to the poor who they view as too dumb to meet basic needs, while also feeling morally superior to the rich who they view as greedy and ruthless.

This is reminiscent of the white supremacists of old who believed that IQ and brain size were only correlated at the low end, because tropical people had small brains, but irrelevant at the high end, since Mongoloid races had the biggest brains. Stephen Jay Gould mocked this as an unbeatable argument: “Deny it at one end where the conclusions are uncongenial; affirm it by the same criteria at the other.”

Unfortunately for the hypocrites, statistics seldom work that way.

The median income (in 2014 dollars) of seven different IQ levels:

In the above chart, the income for IQ 153 people was documented here. The incomes for all the other IQ levels was documented here, but because those were in 1993 dollars, I converted them to 2014 dollars using this calculator. The below scatter plot shows how linear the relationship is, well above IQ 120:

Because income can be quite skewed at the extremes, it also makes sense to convert raw dollars into normalized Z scores. This was accomplished in the below chart by converting the above dollar values into income percentiles for Americans in their early 30s using this calculator. The incomes are then assigned Z scores based on the Gaussian distribution. When this is done, the correlation between IQ and income continues to be beautifully linear well above IQ 120: 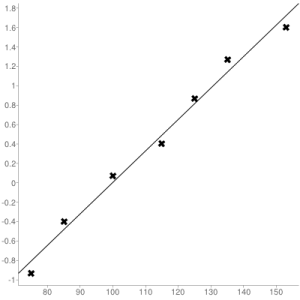