Commenter pumpkinhead made an interesting comment.  I pasted it below in blockquotes, with my replies following the quotes:

I read somewhere that we inherited the genes for depression from Neanderthals. That might have had something to do with their demise. Also I formulated another hypothesis. It may seem simplistic but it looks like humans are fairly obsessed with beauty. Now I understand that beauty is in the eye of the beholder, or is it? Links have been made to the golden ratio, symmetry and proportionality as the qualities that render someone more strikingly beautiful to us. In fact we seem to be obsessed with the idea of symmetry, even among intellectuals and with regard to women beauty is associated with higher fertility and good health.

Is beauty entirely cosmetic? Maybe it is or it may well have on some level and on average a link to survivability. It may tap into both brains and brawn on some level. Narrower more feminine faces in men tilt towards the perception of greater intelligence. Is this perception valid? It might be on some level, due to smaller more slender body types having to rely more heavily on brains to get by. On the flip side brawny manly looking men look like they could defend themselves and their family better but then too brawny, might I say neanderthal-like might be too much of a compromise in terms of beauty. I guess it’s about the right balance between the two on a mass population level.

Well I think humans have an aesthetic preference for tall and thin (like modern humans coming out of Africa) over short and stocky (like Neanderthals adapted to the cold).  Donald Trump wants to build the tallest buildings, not the widest.  Young children assume the tall glass contains more water than the short glass, even if the former is much narrower.  Short men often fear getting too bulky when lifting weights.

This preference may be linked to survivability in that physical size is so metabolically expensive that investing it as efficiently as possible is crucial.  Vertical size might be superior to horizontal size in that you can reach further, walk faster, jump higher, move quicker, and see further.  Horizontal size provides more raw physical strength, but with technology that became increasingly redundant.

So to get to my point, could it be that the Neanderthals died out because they were too ugly and too depressed in comparison to modern humans?

Of course evidence points towards humans basically edging them out of europe and into extinction but simply based on brain size they may well have had the cognitive tools to survive on par with humans(maybe better) but were simply unable to compete with their better looking cousins in terms of procreation.

And if, as you imply, the reason modern humans were considered better looking is because their bodies were more survivable, then they enjoyed a double evolutionary advantage: winning out both in natural selection and then in sexual selection.

Neanderthals might have had larger brains than us but their brains were less spherical, making them less efficient, since as we’ve discussed, the rounder the brain, the shorter the distance between any two points in the brain, thus maximizing efficiency.

Not only that but once modern humans entered freezing Europe, brain size expanded to Neanderthal levels, so not only were Neanderthal brains less efficient, but they were no longer any larger, and may have even been smaller after adjusting for their robust build.

Modern European brains would then shrink with the malnutrition and disease of agriculture, only to recover quite nicely in the well nourished 20th century First World, helping to bring about the Flynn effect. 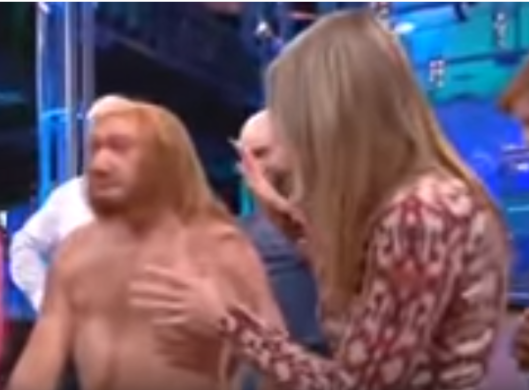 21st century woman appears to have a much bigger brain than Neanderthal reconstruction, though it could be the camera angle

My other hypothesis is that humans might carry genes for ruthlessness disagreeableness and greater sociability(ie less genes on the spectrum) that might have been missing in Neanderthals therefore giving us the edge in the long run.

Yes there’s some fascinating evidence that Neanderthals had autistic traits.