Back in May, Forbes released their 2018 list of the World’s Most Powerful People, not to be confused with Pumpkin Person’s 2018  list of the 100 most influential living people of all time.  Power is what you can do.  Influence is about what you have done.  Here’s the top five in power according to Forbes: 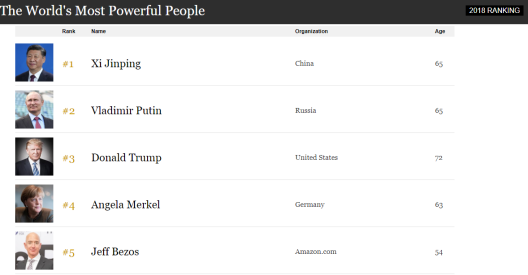 From the perspective of HBD, it seems symbolic than an East Asian is #1.  Don’t agree with Putin being #2.  If any other foreign leader is more power that Trump it should be Bibi, given that Trump recently ripped up the Iran nuclear deal.

To compile the ranking of The World’s Most Powerful People, we considered hundreds of candidates from various walks of life all around the globe, and measured their power along four dimensions. First, we asked whether the candidate has power over lots of people. Pope Francis, ranked #6, is the spiritual leader of more than a billion Catholics. Doug McMillon (#23), is the CEO of the world’s largest private employer, Wal-Mart Stores, with more than 2.3 million workers around the globe.

Next we assessed the financial resources controlled by each person. Are they relatively large compared to their peers? For heads of state we used GDP, while for CEOs, we looked at measures like their company’s assets and revenues. When candidates have a high personal net worth, like the world’s richest man, Jeff Bezos (#5), we also took that into consideration. In certain instances we considered other valuable resources at the candidate’s disposal, like access to oil reserves.

Then we determined if the candidate is powerful in multiple spheres. There are only 75 slots on our list –one for approximately every 100 million people on the planet– so being powerful in just one area is often not enough. Our picks project their influence in myriad ways: Elon Musk (#25) has power in the auto business through Tesla Motors, in the aerospace industry through SpaceX, because he’s a billionaire, and because he’s a highly respected tech visionary.

Lastly, we made sure that the candidates actively used their power. North Korean dictator Kim Jong-un (#36) has near absolute control over the lives of the 25 million people who live in his country, and is known to punish dissent with death.

To calculate the final rankings, a panel of Forbes editors ranked all of our candidates in each of these four dimensions of power, and those individual rankings were averaged into a composite score. This year’s list comes at a time of rapid and profound change, and represents our best guess about who will matter in the year to come.

In my previous discussion of the World’s richest people, I noted that blacks were dramatically underrepresented in wealth, but given the cultural capital of black celebs, one might have expected more blacks among the World’s most powerful.

And yet blacks are only about 1% of the list, despite being 15% of the World’s population, and despite all the super famous U.S. blacks, not a single African American made the list this year.  It seems blacks get a lot of fame, visibility and status, but are still locked out of power.

To quote J.R. Ewing, “nobody gives you power.  Real power, is something that you take.”