Roseanne and her TV husband Dan

[Please place all off-topic comments in the open thread. They will not be published here.]

It seemed like just yesterday that I was blogging about the return of the Roseanne show and this afternoon I got a frantic text message telling me it’s been cancelled, despite massive ratings.  Apparently on twitter she implied Barack Obama’s African American assistant Valerie Jarret is a monkey:

Although the anti-black slur is what got her fired, I suspect what really angered Roseanne about Jarret was the fact that she was born in Iran, yet had President Obama’s ear.  This is anathema to the wildly pro-Israel Roseanne who recently thanked her hero President Trump for moving the U.S. embassy to Jerusalem.  So powerful are ethnic genetic interests that Roseanne has now derailed her big TV comeback just to advance hers.

I wonder what the rest of the cast (who must be so grateful to be back on TV) were thinking when they got the news: “What do you mean we’re cancelled? It’s the highest rated sitcom in years?  We’re cancelled because she said ‘what?'”

Bog Iger (the CEO of Disney company which owns ABC, the network that broadcasts Roseanne) said  “There was only one thing to do here, and that was the right thing.”  Iger is the seventh most influential living human of all time.

Apparently this wasn’t the first time Roseanne had implied a black woman is an ape, having made a similar tweet about Obama aid Suzanne Rice. 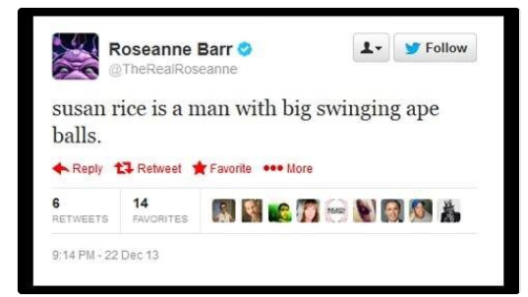 For those who have admired Roseanne for decades, this whole issue is very sad.  Like Oprah who came before her, Roseanne was a trailblazer for overweight women especially those from the lower class.   Given the huge audience of the show, I wonder if another network or streaming service will dare pick it up.

Of course we should have seen this coming. Back in April, there was a scene on Roseanne’s sitcom where they fell asleep on the couch and missed all the minority lead sitcoms that evening.  Roseanne’s character (also named Roseanne) turned to her husband Dan and said “they’re just like us. There, you’re all caught up.”

It was a dismissive way of implying these shows had nothing to say that couldn’t be summed up in a few words, and it raised eyebrows at the time.