[PLEASE PLACE ALL OFF-TOPIC COMMENTS IN THE MOST RECENT OPEN THREAD.  THEY WILL NOT BE POSTED IN THIS THREAD]

[WARNING:  THIS ARTICLE IS NOT AN ENDORSEMENT OF THE OLD SAT AS AN IQ TEST, IT SIMPLY EXPLAINS WHAT YOUR IQ ON THE OLD SAT WOULD BE IF THE SAT WERE AN IQ TEST.  THE LINE BETWEEN IQ AND ACHIEVEMENT TESTS IS PARTLY SEMANTIC]

Well, that’s odd I thought, since all SAT scores from the early 1940s to 1994 are supposedly scaled to reflect the same level of skill, why did it suddenly become 50 SAT points easier to be in the top 2% in 1974?  And if such an abrupt change can occur in 1974, why assume stability every year before and since?  It didn’t make any sense.

And I wasn’t the only one who was wondering.  Rodrigo de la Jara, owner of iqcomparisonsite.com, writes:

If someone knows why they have 1300 for scores before 1974, please send an email to enlighten me.

The mean verbal and math SAT scores, if ALL U.S. 17-year-olds had taken the old SAT

To determine how the old SAT maps to IQ I realized I couldn’t rely on high IQ society cut-offs.  I need to look at the primary data.  Now the first place to look was at a series of secret studies the college board did in the 1960s, 1970s, and 1980s.  These studies gave an abbreviated version of the SAT to a nationally representative sample of high school juniors.  Because very few Americans drop out of high school before their junior year, a sample of juniors came close to representing ALL American teens, and then scores were statistically adjusted to show how virtually ALL American teens would average had they taken the SAT at 17. The results were as follows (note, these scores are a lot lower than the actual mean SAT scores of people who take the SAT, because they also include all the American teens who usually don’t):

The verbal and math standard deviations if ALL U.S. 17-year-olds had taken the old SAT

Once I knew the mean SAT scores if ALL American teens had taken the SAT at 17 in each of the above years, I needed to know the standard deviations.   Although I knew the actual SDs for 1974, I don’t know them for other years, so for consistency, I decided to use estimated SDs.

According to the book The Bell Curve, since the 1960s, virtually every single American teen who would have scored 700+ on either section of the SAT, actually did take the SAT (and as Ron Hoeflin has argued, whatever shortfall there’d be would be roughly balanced by brilliant foreign test takers).  This makes sense because academic ability is correlated with taking the SAT, so the higher the academic ability, the higher the odds of taking the SAT, until at some point, the odds likely approach 100%.

Using the above percentages for each year, I determined how many SDs above the U.S. verbal or math SAT mean (for ALL 17-year-olds) a 700 score would be on a normal curve, and then divided the difference between 700 and each year’s mean (table I) by that number of SDs, to obtain the estimated SD. Because table I did not have a mean national score for 1994, I assumed the same means as 1983 for both verbal and math.  This gave the following stats:

Table II: Estimated means and SD for the pre-re-centered SAT by year, if all U.S. 17-year-olds had taken the SAT, not just the college bound elite.  NOTE: these are not ACTUAL SDs.  These are the SDs you’d expect if the distribution were normal, given the mean score & the top 1% score.

Calculating verbal and math IQ equivalents from the old SAT

Armed with the stats in chart III, it’s very easy for people who took the pre-recentered SAT to convert their subscale scores into IQ equivalents.  Simply locate the means and SDs from the year closest to when you took the PRE-RECENTERED SAT, and apply the following formulas:

Calculating the mean and SD of the COMBINED SAT if all U.S. 17-year-olds had taken the test

Now how do we convert combined pre-recentered SATs (verbal + math) into IQ equivalents.  Well it’s easy enough to estimate the theoretical mean pre-recentered SAT for each year by adding the verbal mean to the math mean.  But estimating the standard deviation for each year is trickier because we don’t know the frequency for very high combined scores for each year, like we do for sub-scale scores (see Chart II).  However we do know it for the mid 1980s. In 1984,  23,141 people scored 1330+ on the combined SAT.  Of course most American teens never write the SAT, so we’ll never know precisely how many could have scored 1330+, but Hoeflin argued that virtually 100% of teens capable of scoring extremely high on the SAT did so, and whatever shortfall there might be was negated by bright foreign test-takers.

But how do we determine the SD for the combined old SAT for other years?  Well since we know the estimated means and SD of the subscales, then Formula III is useful for calculating the composite SD (from page 779 of the book The Bell Curve by Herrnstein and Murray):

However since we just estimated that the SD of the combined SAT if all 17-year-olds took the SAT in 1983 would have been 220, and since we know from Chart III that the 1983 verbal and math SDs if all 17-year-olds had taken the SAT would have been 116 and 124 respectively, then we can deduce what value of r would cause Formula III to equal the known combined SD of 220.  That value is 0.68 (virtually the same as in the SAT population)*

Now that we know the correlation between the verbal and math SAT if all U.S. 17-year-olds had taken the SAT would have been 0.68 in 1983, and if we assume that correlation held from the 1960s to the 1990s, using the sub-scale SDs in chart III, we can apply Formula III to determine the combined SDs for each year, and of course the combined mean for each year is just  the sum of the verbal and math means in chart III.

Table III: Mean and estimated SD if all U.S. 17-year-olds had taken the SAT, not just the college bound elite.  NOTE these are not real SDs, but derived from the reverse engineered SDs in table I

Armed with the stats in Chart IV, it’s very easy for people who took the pre-recenetered SAT to convert their COMBINED scores into IQ equivalents.  Simply locate the means and SDs from the year closest to when you took the PRE-RECENTERED SAT, and apply the following formula:

*Note: the IQ equivalent of SAT scores above 1550 or so will be underestimated by this formula because of ceiling bumping.  See below for how to convert stratospheric scores.

Of course all of my numbers assume a normal distribution which is never perfectly the case, and it’s also possible that the 0.68 correlation between verbal and math I found if all 17-year-olds took the SAT in 1983 could not be generalized to other years, so perhaps I’m wrong and Mensa is right.

And in Mensa’s defense, they were probably erring on the conservative side (better to turn away some Mensa level scores, than accept non-Mensa level scores).  But it would be nice to know how they arrived at their numbers because it’s obviously way too simplistic to have only two Mensa cut-offs (one before and one after 9/30/74) for all the decades the pre-re centered SAT was used, given the fluctuations that occurred from the 1960s to the 1990s.

The above conversions were based on the assumption that the SAT would have a roughly normal distribution in the general U.S. population, which is likely true for 99% of Americans but likely false at the extremes.

Below is incredibly rare data of the total number of people in 1984 who scored high on the combined SAT. 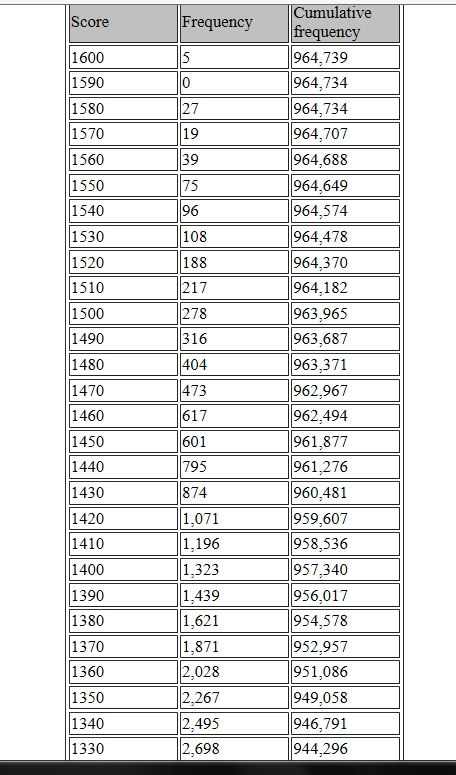 Thus, for extremely high SAT scores obtained in the mid 1980s, please use table V and not formula IV:

I am not suggesting that a 1600 in the mid-1960s reflects the same level of academic skill as 1542 in the mid-1980s, (the college board worked very hard to keep old SAT scores equal over the decades) but they may reflect the same percentile, relative to the general U.S. population of 17-year-olds, assuming the shape of the distribution stayed roughly constant, and the correlation between verbal and math did too.  Because IQ is never an absolute measure of intelligence, only a measure of where one ranks compared to his age mates in a specific population (typically the general population of the U.S. or U.K. or just the white populations thereof)

*in a previous article I estimated a 0.36 general population correlation between verbal and math by estimating the combined SD from a freakishly high point on the curve, but now that I have more data,  I prefer to do the calculations from a less extreme percentile given the ceiling bumping that distorts the SAT distribution at the extremes.