This is an open thread for the week March 18 to March 24.  Feel free to discuss all off-topic comments here.

So the World’s biggest brained woman was making the talk show rounds, promoting her new movie A Wrinkle in Time where she plays a good witch.  The movie is directed by Ava Duvernay,  the first black woman to direct a nine figure movie.  Oprah absolutely adores the smaller brained Ava:

Oprah’s appearance on James Corden’s show was odd, but I was impressed by Oprah knowing the exact materials her bathtub was carved out of when Cordon pursued this odd line of questioning.  Cordon’s big head was dwarfed by Winfrey’s.

So high is Oprah’s status that she’s considered a viable presidential candidate despite zero politically experience. 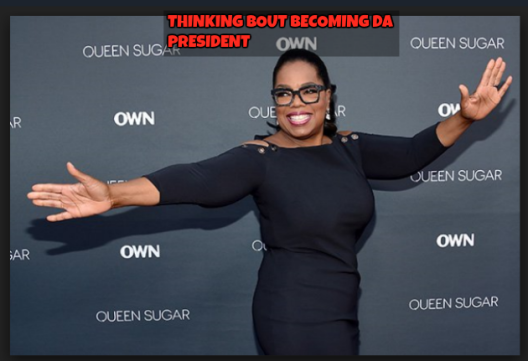 Oprah will almost certainly never run for president, but she enjoyed the attention of so many people thinking she’d win.  And while Oprah recently claimed she doesn’t know enough to be president and her critics dismiss her as an overrated vapid celeb, I estimate she’d be the most intelligent President since Bill Clinton.

Indeed when Oprah was a teenager attending a working class high school in Nashville Tennessee, she won so many public speaking contests that she was invited to the white house to meet Nixon.  Nixon secretly believed the “Negro” was genetically less intelligent, but not even Nixon could know that this particular young girl had a cranium that dwarfed his own, and with a lot of luck and hard work, would become (at her peak) the World’s richest black and most influential woman.

Oprah in the Nixon era