[NOTE FROM PUMPKIN PERSON: The following is a guest article by Zeitgeisterfahrer and does not necessarily reflect the views of Pumpkin Person.   PLEASE PLACE ALL OFF-TOPIC COMMENTS HERE.  THEY WILL NOT BE POSTED IN THIS THREAD]

I discovered this image that shows the average faces of of many countries. 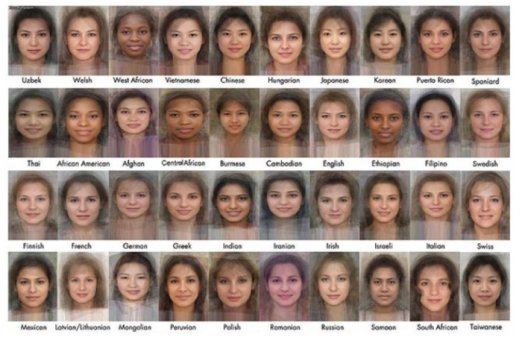 The average face of each country looks much better than a random person
from that country. If I had to rate the attractivity of 100 people in 100 rounds against the country’s average face, the the latter would likely win in most cases.

What is the reason why we prefer beautiful people?
Natural selection!

We prefer beautiful people because we are the descendents of people who prefered attractive (who we now consider attractive) people and mated with them or were beautiful themselves.
They had more offspring and their offspring prefered people with similar faces.
Those who didn’t prefer them had less offspring.

Unattractive people don’t resemble our ancestors that much.
Their package wasn’t very successful and people who considered them okay or attractive were sorted out.
That’s why we have a preference for some faces and and an aversion to other faces.

Attractive people are the best representation of our ancestors. Their body and mind shows us, how the abilities or our ancestors were and
how and if we diverge from them.

The most attractive people are the mean of the bell curve of our ancestors.

They are less likely to be very dumb or very smart.

They show us how our generation compares to them.

Especially interesting is the comparison of a whole country vs a selection of attractive people.

According to my theory, americans are 4-6 points less intelligent than their ancestors.

Selection of course has an effect on the perception of attractivity. That means attractive people are a bit less smart than our ancestors,
because the people who are less average and who have more offspring become more average over time.

If beautiful people in a society have an above average IQ, that means the society is dysgenic and selects for less intelligent people.

If beautiful people in a society have a below average IQ, that means the society is eugenic and selects for more intelligent people.

It’s highly likely that attractive people are smarter in all western countries, which means that we have become more stupid.

31 thoughts on “The beautiful average theory by Zeitgeisterfahrer”