[NOTE FROM PUMPKIN PERSON: PLEASE PLACE ALL OFF-TOPIC COMMENTS HERE.  THEY WILL NOT BE POSTED IN THIS THREAD] 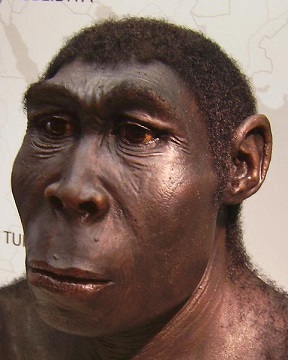 I’ve posted about the IQ of Homo Erectus before, but in this post, I will refine my analysis based on new information.

According to research cited by scholar Richard Lynn, Homo erectus emerged 1.7 million years ago with an average cranial capacity of 885 cc and by 200,000 years ago, their cranial capacity had increased to 1,186 cc.

How does this compare to modern white cranial capacity?  Anthropologists still cite data from before WWII which is useless because people were short and malnourished back then.  The most up to date direct data I could get on white brain size was a 1980 study of autopsied brains at the Case-Western Reserve University’s Medical School in Cleveland, Ohio.  At age 25 white male brains averaged 1570 g and white females averaged 1339 g,  which I converted to in vivo volumes of 1492 cc and 1273 cc respectively, for a sex-combined white mean 1383 cc.

People use the terms brain size and cranial capacity interchangeably, but the reality is that much of your intracranial volume is cerebrospinal fluid cushioning your brain from blows to the head.  Indeed when I looked at the brain volume/intracranial volume ratio for control subjects in table II of this study,   I found it to be 0.906, which means the sex-combined white brain volume of 1383 cc I cited above, needs to be divided by 0.906 to get the sex-combined cranial capacity, which is 1526 cc.  And the within race, within sex, standard deviation for cranial capacity appears to be about 91 cc ( see table 1 of Rushton’s data), which means that when Erectus first appeared with their 885 cc heads, they were 7.04 SD smaller brained than today’s whites, but by the end of their run when they were 1,186 cc, they were 3.74 SD smaller brained than today’s whites.

The 0.45 correlation between IQ and brain size suggests that for every 1 standard deviation increase in brain size, IQ is expected to increase (on average) by 0.45 standard deviations,  so when Erectus was 7.04 SD smaller brained than today’s whites, their expected IQ was 7.04 SD(0.45) = 3.17 SD lower than modern whites.  Since whites by definition have a mean IQ of 100 with an SD of 15, this gives early Erectus an expected IQ of 52.

How well does brain size predict the fossil evidence for cognitive ability?

The IQ of Homo erectus

Experiments suggest that it’s not until a child is seven that she has the mental capacity to create the kind of stone tools Homo erectus created. In other words, Homo erectus may have had the intelligence of a Western seven-year-old. On the WISC-R IQ test, an incipient adult (age 16.9) who performs like a seven-year-old on the spatial construction subtest scores lower than 99.5% of biologically normal members of his generation. In other words, an IQ of about 60.

But we should keep in mind that the research on seven-year-old tool making ability was published in 1979. Probably because of better nutrition/health, truly culture reduced spatial skill has been improved by about 0.2 points a year until 2006 (when U.S. nutrition gains seem to have ended). So Homo erectus probably had an IQ around 55 on the most recent culture reduced Western norms (U.S. white norms).  This is about the IQ predicted from the brain size of early erectus, however it’s well below the IQ 75 predicted for bigger brained later erectus.

Either erectus had other brain deficiencies that prevented their IQs from rising above the 50s despite increasing size, or they made more sophisticated tools later in their existence that I’m not aware of.