A popular theory among U.S. elites:  Trump ran for President because he was so humiliated by Barack Obama at the 2011 White House Correspondents’ Dinner that it was the only way to save face.  Explaining the theory Dan McLaughlin writes:

Despite being born to wealth, he’s lived his whole life as the nouveau riche kid from Queens whose fame, fortune, Ivy League degree, fashion-model wives, TV shows, casinos, beauty pageants, football team, political largesse . . . none of it could get his old-money Manhattan society neighbors, the smart kids, the political movers and shakers to treat him as a peer, an equal, a man of consequence.

Partly because of this,  The New York Time‘s Charles M. Blow argues Trump is jealous of Obama:

Trump wants to be Obama — held in high esteem. But, alas, Trump is Trump, and that is now and has always been trashy. Trump accrued financial wealth, but he never accrued cultural capital, at least not among the people from whom he most wanted it.

Therefore, Trump is constantly whining about not being sufficiently applauded, commended, thanked, liked. His emotional injury is measured in his mind against Obama. How could Obama have been so celebrated while he is so reviled?

The whole world seemed to love Obama — and by extension, held America in high regard — but the world loathes Trump.

Obama was a phenomenon. He was elegant and cerebral. He was devoid of personal scandal and drenched in personal erudition. He was a walking, talking rebuttal to white supremacy and the myths of black pathology and inferiority. He was the personification of the possible — a possible future in which legacy power and advantages are redistributed more broadly to all with the gift of talent and the discipline to excel.

Given this backdrop, when Obama lured Trump to the 2011 White House Correspondents’ Dinner to be laughed at to his face by a room full of  U.S. elites and on international TV, he snapped, according to The New Yorker‘s Adam Gopnik:

On that night, Trump’s own sense of public humiliation became so overwhelming that he decided, perhaps at first unconsciously, that he would, somehow, get his own back — perhaps even pursue the Presidency after all, no matter how nihilistically or absurdly, and redeem himself

On the night of the dinner, Trump took his seat at the center of the ballroom, perfectly situated so that all 2,500 lawmakers, movie stars, journalists, and politicos in attendance could see him….But as soon as the plates were cleared and the program began, it became agonizingly clear that Trump was not royalty in this room: He was the court jester. The president used his speech to pummel Trump with one punchline after another…When host Seth Meyers took the mic, he piled on with his own rat-a-tat of jokes, many of which seemed designed deliberately to inflame Trump’s outer-borough insecurities: “His whole life is models and gold leaf and marble columns, but he still sounds like a know-it-all down at the OTB.” The longer the night went on, the more conspicuous Trump’s glower became. He didn’t offer a self-deprecating chuckle, or wave warmly at the cameras, or smile with the practiced good humor of the aristocrats and A-listers who know they must never allow themselves to appear threatened by a joke at their expense. 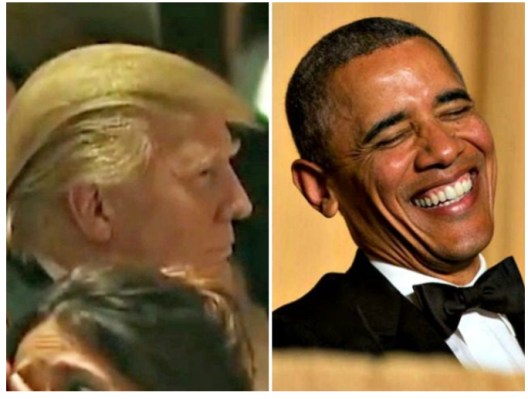 Instead, Trump just sat there, stone-faced, stunned, simmering — Carrie at the prom covered in pig’s blood.

It’s ironic that Coppins seems to hint at Trump’s lack of social intelligence in this situation since commenters on this blog often praise Trump as one of the greatest social geniuses of our time, a reasonable opinion given Trump beat the top politicians in America at the their own game, despite no political experience.  Perhaps Trump was just too angry to display his social skills on that night, or perhaps his type of social savvy can’t adapt to upper class environments.

More interesting, given it’s Halloweek, was Coppins’s reference to Stephen King’s first novel.  In Carrie, after being lured to the prom by the elite kids only to be publicly laughed at, a high school senior takes her revenge by becoming the most powerful girl in the World (destroying the school with her telekinetic powers).

Similarly, after being lured to the White House Correspondents’ Dinner by U.S. elites to be publicly laughed at, Trump got his revenge by becoming the World’s most powerful man, displacing the President who mocked him.

He who laughs last, laughs best.