Scientists commonly assert that evolution is not progressive and that organisms occupying lower branches on the evolutionary tree are not anymore primitive or ancestral than organism’s occupying higher branches, because all extant life are, as journalist Peter Knudtson stated, “equivalent cases of time-tested evolutionary success”.

For example, Harvard biologist Stephen Jay Gould wrote “evolution forms a conspicuously branching bush, not a unilinear progressive sequence…earth worms and crabs are not our ancestors; they are not even ‘lower’ or less complicated than humans in any meaningful sense.”

This web page even displays a helpful diagram of an evolutionary tree to debunk the idea of evolutionary progress:

It’s technically true that no extant species is precisely ancestral to humans.  It’s also true that smart, complex and impressive life forms could theoretically have split off at any point on the evolutionary tree, and that “progress” is a somewhat subjective term.  But if all extant life forms were truly equally evolved, and if lower branching life forms were in no sense ancestral to higher branching life forms,  there should be zero correlation between position on the tree, and “progressive” traits like brain size and encephalization quotient (ratio of brain size to expected brain size for body size).

In order to test this hypothesis, I decided to compare degree of branching on the evolutionary tree (which I defined as number of splits on the tree before a given taxa splits off) and brain size/enchephalization, in 1) three major kingdoms of life, 2) four major animal groups, 3) five major higher primate groups, 4) four species of the genus homo, and 5) nine populations of modern humans.

What I actually found was that all the correlations were positive, ranging from +0.5 to about +1.0.

Correlation between number of splits and encephalization among kingdoms: +0.5

Correlation between number of splits and encephalization among four major animal groups: +0.9

Because mammals have an average encephalization quotient (EQ)  of 1.0,  birds average EQs of 0.75, fish have EQs of 0.05, and worms have unknown EQs, but probably about 0.01, the correlation between EQ and number of splits among major animal groups in the above tree is an astonishing +0.9!

Just from looking at the below two images, it should be obvious that there’s a positive correlation between primate brain size and number of splits on the hominoidea evolutionary tree. 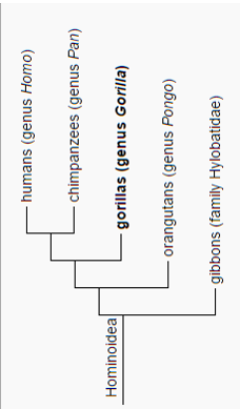 As shown below, the correlation between a primate group’s brain size and its branching on the evolutionary tree is +0.67. 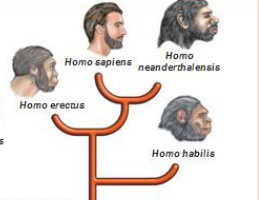 This results in an astonishing +0.995 correlation between brain size and number of splits:

Correlation between brain size and number of splits among nine modern human populations: +0.71

Lastly, I decided to explore the correlation between brain size and number of splits among nine modern human populations using brain size data from Richard Lynn, which he adapted from Smith and Beals (1990).

From Race Differences in Intelligence (2006) by Richard Lynn

Plotting the average brain size of each “race” as a function of number of splits before it branched off of Cavalli-Sforza’s tree gives a potent +0.71 correlation, suggesting that ancient splitting-off dates explain 50% of the variation in racial brain size.

The above correlation between brain size/encephalization and number of splits on the evolutionary tree, are all positive, and in some cases, extremely strong, suggesting 1) evolution is progressive, 2) some extant organisms are more evolved than others, 3) organisms that branch off the evolutionary tree prematurely, and don’t do anymore branching, tend to resemble the common ancestor of said tree.

Although the preliminary evidence I document here is strong, more research is needed because the choice of trees I decided to analyze was not random and one can imagine how a different set of trees might not produce such high correlations.  While I tried to find trees that compared taxa of relatively equal rank (i.e. comparing species with species within the same genus, or comparing race with race within the same species) many of the groupings are arbitrary, and the decision to lump or split various groups can result in fewer or more splits in the evolutionary trees and thus it’s crucial that these decisions are made based on objective criteria.

Nonetheless the fact that trees made by other people, who made them without considering the brains of the taxa, still correlated so consistently with brain size/encephalization, is compelling.

But if evolution is progressive, the question is why?  Stephen Jay Gould claimed that any trend towards complexity is merely an artifact of the fact that life started extremely simple, and had nowhere to go but up, so random variation in all directions will be progressive merely because there’s a floor on how simple life can get.  And yet there’s no floor on how small a brain can get, but I have yet to find a single phylogenetic tree where encephalization is negatively correlated with number of splits, and while such trees undoubtedly exist, they are conspicuously rare.  Thus an additional explanation for evolutionary progress is that because intelligence allows organisms to adapt behaviorally instead of genetically, it’s more efficient than evolving new traits every time the environment changes, and thus it tends to be highly favoured by natural selection.

Although the notion of evolutionary progress is today often dismissed as pseudoscience, it has a rich intellectual history that predates even the theory of evolution itself by over two millennia. 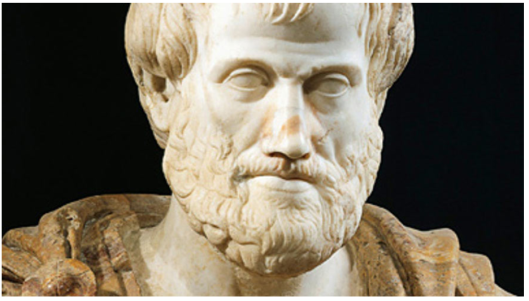 As J.P. Rushton noted, Aristotle suggested a scala naturae in which animals > plants > inanimate objects.   One of the most important ideas in Western thought,  Aristotle viewed higher ranked organisms as more perfect, God-like and rational.  The great Greek philosopher stated:

Now some simply like plants accomplish their reproduction according to the seasons; others take trouble as well to complete the nourishing of their young, but once accomplished they separate from them and have no further association;  but those that have the understanding and possess some memory continue the association, and have a more social relationship with their offspring.

Over 2000 years later this would be roughly known as the r/K scale where K selected organisms have lower reproduction rates, but higher survival rates, investing in more parenting than reproducing, while r selected organisms do the opposite.

Although r/K theory (and its applications to humans) has been severely criticised, it remains undeniable that regardless of its selective agents, there is an evolutionary trade-off between high quantity and high quality offspring and different organisms fall at different points on this continuum.

(2) the emergence of eukaryotes with nucleus and mitochondria

(4) the emergence of the human mind

Princeton biology professor John Bonner noted that there’s been an evolution from primitive bacteria billions of years ago to complex life forms today, and the newer animals have bigger brains than older animals and that it’s perfectly natural to say that older life forms are lower than newer life forms, because their fossils are literally found in lower strata. Even plants can be ranked he argued; angiosperm > slime molds.

While the specific humanoid form Russell imagined was highly speculative, the increase in encephalization seems quite plausible.

Inspired by such thinkers, in 1989 J.P. Rushton argued that archaic forms of the three main races (Negroids, Caucasoids, and Mongoloids) differed in antiquity, with newer races being more K selected than older races, though Rushton’s model has excited enormous criticism.

118 thoughts on “Marching up the evolutionary tree”