One of the problems with studying the controversial subject of race and IQ is we do not have reliable data on the racial IQ distributions of very many races.  Richard Lynn’s 2006 book made a major contribution to the field, but analyzing hundreds of studies was too ambitious a task for a single 76-year-old man and inevitably the research was criticized for biased selection of data and clerical errors.    Another problem was that different races sometimes took very different tests under wildly different circumstances and living conditions, ranging from modern industrialized society to pre-literate hunter-gathering.

To sidestep these problems, I decided to compare all races on the same type of tests (literacy and numeracy) under similar conditions (as students attending modern schools).  Although achievement tests are not technically IQ tests, they correlate better with IQ tests than some of the actual IQ tests used by Lynn (i.e. Mazes, Draw a Person) and because they are only taken by people with similar schooling, some of the culture bias inherit in all paper and pencil tests is removed.  They also have the advantage of being given to huge and representative samples. 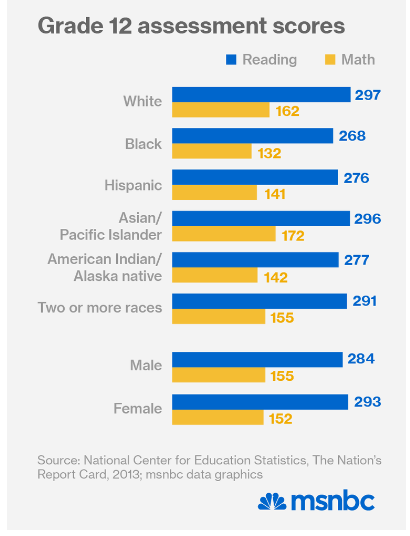 The first major data set is the NAEP mass testing of U.S. 12th graders (above), known as the nation’s report card.  Since an IQ of 100 is by definition whatever score the average U.S. white obtains, a reading, math, and combined score score of 297, 162, and 459 are all equal to IQ 100.  Since I already estimated that U.S. black 12th graders in recent years score an IQ equivalent of 90, 86, and 87 in reading, math, and combined respectively, simple linear extrapolation allows us to infer the IQ equivalents of all the above demographic groups:

The scores of Asian Americans are probably dragged down a bit by the inclusion of Southeast Asians, Pacific Islanders and people with language difficulties.  I suspect if the Asian sample was limited to second generation Northeast Asian Americans, the mean combined IQ would be 105.  Some might argue that Asian scores are inflated by selected migration and a culture of studying.  While the latter might be true, the former is unlikely given the spectacular academic performance of Northeast Asians in their home countries.

The scores of American Indians/Alaskas natives are probably dragged down by fetal alcohol syndrome and extreme cultural deprivation.  Just as African Americans saw their IQs as measured by achievement tests increase from 80 in the 1970s to 87 today, I suspect indigenous Americans are also 7 points below their genetic potential and may have the genetic potential to average 98.

Jewish Americans are not included here but previous large scale research suggests a verbal IQ of 109, a math IQ of 113, and thus a combined IQ of 112 on measures of reading and math.  Ashkenazi Jews have an anomalously high IQ for a Caucasoid race, but they are such a tiny percentage of the population that I suspect the highest IQs in the World all belong to peoples of Northeast Asian ancestry.

Meanwhile they score 0.9 SD below on math, suggesting a math IQ of 86.

This suggests a combined IQ of 85.  However like indigenous Americans, I suspect that Australian aboriginals are like U.S. blacks in the 1970s (scoring at least 7 IQ points below their potential on achievement tests) so I estimate their potential IQ to be 92.

However I also estimate that indigenous Australians are 43% white at the genetic level, and correcting for this reduces the potential IQ of full-blooded Australoids to 86.

Data from PISA studies suggest dark caucasoids in Turkey average about 87, but like indigenous peoples, the Arab world is probably about 7 points below their full potential given that less than half of the Turkish population finishes high school, so I suspect they have the genetic potential to be IQ 93.