[Comment from pumpkin person, May 10, 2017: the following is a guest post from commenter Race Realist and does not necessarily reflect the views of Pumpkin Person.  Out of respect for the author, please try to keep all comments on topic, although I realize discussions naturally evolve over time]

Note: This article is high speculation based on the finding that occurred last week of the modification of mastodon bones in Ice Age California. If it is an actual archaeological site, along with being the age it’s purported to be, there are, in my opinion, only two possibilities for who could be responsible: erectus or the Denisova. Though I will cover evidence that Erectus did make it to America between 40-130,000ya, and rule out that Neanderthals are the hominid responsible.

It was discovered last week that there was human activity at an archeological site in San Diego, California, dated to about 130,000 years ago. Researchers discovered pieces of bone and teeth from a mastodon—that looked to have been modified by early humans. This discovery—if it shows that there was a hominid in the Americas 130,000ya—would have us rethink hominin migrations in the ancient past.

The bones and teeth show signs of having been modified by humans with “manual dexterity and experiential knowledge.” The same pattern was discovered in Nebraska and Kansas, where it was ruled out that carnivorous animals were responsible (Holen et al, 2017).

Now, we only have a few pieces of broken bone and some teeth from a mastodon. It is possible that ‘Natives’ dug up the mastodon skull and modified it, but I like to think outside of the box sometimes. When I first read the ScienceDaily article on the matter, the first hominin that popped into my head that could be responsible for this is erectus. But what is the evidence that he could have made it to the Americas that long ago?

Evidence for erectus in America is scant. We have discovered no erectus skeletons in the Americas, and we only have a few pieces of bone to go off of to guess which hominid did this (and I doubt it was Homo sapiens or Neanderthals, I will explain my reasoning below).

I’ve been documenting on my blog for the past six months that, contrary to popular belief, erectus was not a ‘dumb ape’ and that, in fact, erectus had a lot of modern behaviors. If it turns out to be true that erectus made it to America, that wouldn’t really surprise me. 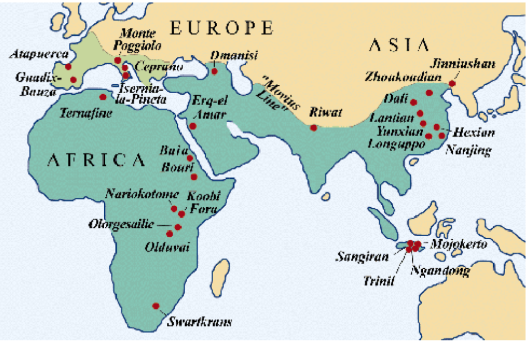 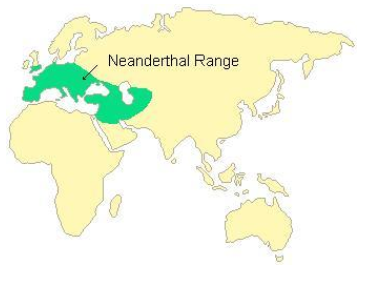 Erectus had a wider territory than the other hominid candidates (Neanderthals, Homo sapiens) and the other candidate—the Denisova—were situated more to the middle of the Asian continent. So this, really, leaves us only with erectus as the only possible candidate for the mysterious hominin in Caliofornia—and there is evidence that (albeit, extremely flimsy), erectus may have possibly made it to America, from a paper published back in 1986. Dreier (1986) writes that there is evidence of Man in America before 30kya, and if this is true, then it must be erectus since the estimated dates are between 50-70 kya—right around the time that AMH began migrating out of Africa. Dreier (1986) goes through a few different discoveries that could have been erectus in America, yet they were only modern skeletons. However, absence of evidence is not evidence of absence. (Though I will return to this specific point near the end of the article.)

How could erectus have possibly made it to America?

This is one of the most interesting things about this whole scenario. There is evidence that erectus made rafts. If erectus did make it to Flores (Stringer, 2004; Hardaker, 2007: 263-268; Lieberman, 2013)—eventually evolving into floresiensis (or from habilis or a shared common ancestor with habilis)—then he must have had the ability to make rafts. Since we have found erectus skulls at Java, and since certain bodily proportions of floresiensis are ‘scaled-down’ from erectus, along with tools that erectus used, it’s not out of the realm of possibility that erectus had the ability to navigate the seas.

One way that hominins can get to America is through the Bering strait. However, Dreier (1986) assumes that erectus was not cold-adapted, and insists that erectus could have only gone into higher latitudes for only a few months out of the year when it was warmer. As you can see from the above map of erectus’ territory, he lived along the coast of China and into some of the islands around SE Asia. While we don’t have any skeletal evidence, we can infer that it was late Asian erectus who could have possibly, made it to the Americas. So since it was late in erectus’ evolution, we would expect him to have a large brain size in order to 1) survive in Africa and 2) since brain size predicts the success of a species in novel environments (Sol et al, 2008), erectus would have had a larger brain in these locations. So it seems that erectus did have the same adaptability that we do—especially if he actually did make it to the Americas.

Dreier (1986) posits that erectus could have traveled along the Aleutian island chain in Alaska, eating marine life (shells, mollusks, clams, etc), and so he would not have had to “deviate from the 53 north latitude vitamin D barrier drastically since almost the entire Aleutian Island chain falls between the 50 and 55 north latitude lines, and access via this route may have been possible during glaciation when sea levels in the area dropped as much as 100 meters” (Dreier, 1986: 31). Erectus could have gotten vitamin D from shells, mollusks, and other marine life, as they are extremely high in vitamin D (Nair and Maseeh, 2012). I will contend that erectus rafted to America, but the Aleutian island route is also plausible.

Dreier (1986) ends up concluding that our best bet for finding erectus skeletons in America is along with Pacific coast, and there may be some submerged underwater. However, with the new discovery last week, I await more work into the site for some more answers (and of course questions).

However, contra Dreier’s (1986) claim that we should stop looking for sites with human activity earlier than 30,000 years, this new finding is promising.

Neanderthals were seafarers, just like erectus, and later, us. However, there is evidence for Neanderthals sailing the seas 100kya, however, earlier dates of seafaring activity “as far back as 200 ka BP can not be excluded.” (Ferentinos et al, 2012). Further—and perhaps most importantly—the range of the Neanderthals was nowhere near the Pacific Ocean—whereas erectus was. So since there is little evidence of seafaring 200kya (which cannot be excluded), then we’re still left with the only possibility being erectus go to the Americas either by walking the Aleutian islands or rafting across the Pacific.

Could erectus have killed animals as large as a mastodon?

Erectus was killing elephants (Elephas antiquus) around 400kya in the Levant (Ben-Dor et al, 2011). Then, when the elephants went extinct, erectus had to hunt smaller, quicker game and thus evolved a smaller body to deal with the new environmental pressure—chasing a new food source. So erectus did have the ability to kill an animal that big, another positive sign that this is erectus we are dealing with in California 130,000 years ago.

An erectus skeleton in America?

An osteologist discovered a brow bone in the Americas, and in an unpublished report in 1990, he says the brow’s thickness and structure is comparable to African erectus, with a reanalysis showing it was closer to Asian erectus—just what we would expect since Asian erectus may have been a seafarer (Hardaker, 2007). However, the author of the book reiterates the Texas A&M osteologists’ findings writing: “these comparisons do not imply that preHomo sapiens were in the Americas” (Steen-McIntyre, 2008).

Humanlike thinking evolved 1.8 mya, right around the time erectus came into the picture (Putt et al, 2017). Volunteers created Auchulean tools while wearing a wearing a cap that measured brain activity. Visual attention and motor control were needed to create the “simpler Oldowan tools”, whereas for the “more complex Auchelian tools” a “larger portion of the brain was engaged in the creation of the more complex Acheulian tools, including regions of the brain associated with the integration of visual, auditory and sensorimotor information; the guidance of visual working memory; and higher-order action planning.” This discovery pushes back the advent of humanlike cognition, since the earliest tools of this nature are found around 1.8 mya. There is a possibility that some erectus may have had IQs near ours, as studies of microcephalics show that a large amount have higher than average IQs (Skoyles, 1999).

Evidence is mounting that erectus was more than the ‘dumb ape’ that some people say he is. If erectus did make it to America—and the possibility is there—then human migratory patterns need to be rewritten. I hope there is more evidence pointing to what hominid was in the area at that time—and if there is evidence of humanlike activity there, it most likely is erectus. It is extremely possible that erectus could have gotten to America, as there is evidence that he was at least in northern China. So he could have sailed to the Americas or walked along the Aleutian islands.

The evidence for erectus in America is compelling, and I hope more is discovered about what went on at this site and who was there. Even if it wasn’t erectus, there is still some compelling evidence that he did make it to America.

201 thoughts on “Homo Erectus in America? by Race Realist”