When I was a young child (I’m now in my 30s), I was VERY conservative, which is odd because I grew up in a liberal household.  Usually the children are more liberal than the parents but in my home it was just the opposite,  and it created a lot of conflict from a young age.

Because the Ontario media was so obsessed with J.P. Rushton I ended up believing in HBD, but because my family was so liberal, I was very uncomfortable about HBD views, and I wanted to know that there were at least some blacks who didn’t fit the racialist stereotypes.

But sadly, everywhere I looked, the oppressive racialist stereotypes were being fulfilled.  From my distorted immature perspective, a lot of black celebrities seemed to fulfill the stereotype that blacks were good at music, dance and sports, rather than more substantive pursuits.  Even witty black celebrities like Bill Cosby and Eddie Murphy fulfilled the stereotype of blacks just being clowns there to amuse whites.  And gangsta rap was the embodiment of the most violent and sexual of black stereotypes.

And then I started watching Oprah and for the first time in my life, here was a black person who just exuded intelligence and dignity.  And while she could be incredibly entertaining, much of the time she discussed serious issues in an articulate way. Despite being fat, she was so dignified in how she carried herself, crossing one obese panty hosed leg over the other with lady-like precision; putting her finger on her chin pensively as she listened to her guests.  Despite her chronic overeating, when it came to hair and makeup, she was meticulous.  “Word in the ghetto is Oprah got the best hair,” joked Eddie Murphy.

in a society where fat is taboo, she made it in a medium that worships thin and celebrates a bland, white-bread prettiness of body and personality…But Winfrey made fat sexy, elegant — damned near gorgeous – with her drop-dead wardrobe, easy body language, and cheerful sensuality.

But while  my feminine side was admiring Oprah, my masculine side had joined the cadets and this made me extremely homophobic because in the cadets at the time (I’m sure it’s different today), it was taboo for a guy to even touch another guy in any way (not even tapping him on the shoulder) and they were constantly calling one another “fags” and “queers”, and wanting to fit in, I subconsciously internalized this homophobia and became very hostile towards gays.

One afternoon while watching Oprah, the audience was full of male body builders as well as women with very short hair died white.  Another show about gays I thought with a sigh.

And Oprah was no longer the fat best friend America had fallen in love with, but a svelte, more militant Oprah. 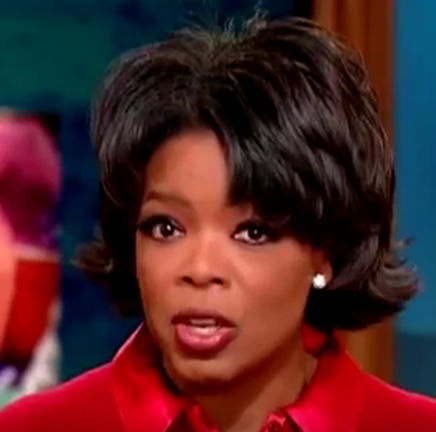 There was a nerdy conservative intellectual who was very much opposed to gay marriage, arguing that we can’t let gays marry because the definition of marriage is a man and a woman, so if it would be like, the definition of water is H2O, so if we start calling vinegar water, that changes the definition.

“Are you implying that heterosexual is to water and gay is to vinegar?” asked Oprah.

“No of course not,” he huffed condescendingly “that’s just an analogy”.

But the climax of the show was when some redneck woman wearing a cowboy hat stood up in the audience and said “gays are constantly flaunting their gayness and I’m tired of it!”

There was a quiet smattering of applause from the few anti-gay people in the studio audience that day.

And then, in one of the most powerful moments in TV history, Oprah walked right up to her and said “you know what I’m tired of?  HETEROSEXUAL MALES RAPING AND SODOMIZING YOUNG GIRLS. THAT’S WHAT I’M TIRED OF!!!!!!!!!!!!!!!”

By the time Oprah had finished her sentence, almost the entire audience of gay body builders and bleach white haired lesbians were standing up screaming and applauding hysterically.  It was total pandemonium, and one of the most electric things I had ever seen.

Part of the reason the reaction was so enthusiastic was that Oprah seldom gave political opinions in those days, so to hear the World’s most influential woman give one that was so succinct, loud, powerful and graphic, and on behalf of an oppressed minority other than her own, just brought the house down.  In that moment, my homophobia was cured.

Later in the show, a black woman stood up and said “I just want to say homosexuality is wrong because God made Adam and Eve, not Adam and Steve”

Emboldened by the pro-gay audience, Oprah cut her off dismissively: “Okay I hear what you’re saying, but I have to move on.”

Unfortunately the nerdy homophobic conservative was not happy with the direction the show had taken and wanted to knock Oprah off her high horse, and sensed his opportunity:

“Oprah who among us, who have been raised by a mother and a father, woud trade that for being raised by two men?”

“But isn’t a child better off there than in a home where there’s abuse?” Oprah replied.

“Oprah, you can’t compare a worst case scenario.  Isn’t a child better off there than in a burning building?  You could come up with a hundred scenarios. Oprah don’t be absurd!”

Rather than trying to defend an awkward argument, Oprah had the cognitive adaptability to shift gears completely, by saying “I wasn’t trying to absurd, sir”

The tone in her voice made it clear that he had crossed the line, and the nerd walked it back by saying “well, that’s just the way it seemed to me”

Big brained Oprah then cleverly used her power which he did not have, by cutting to commercial break.  Intelligence is the cognitive ability to adapt any situation you’re in to your advantage, but part of adapting to a situation is having the lateral quick thinking and executive brain functioning to change the situation into a more favorable one, rather than perseverating on the one you’re in.

822 thoughts on “How Oprah cured my homophobia”