Many guys in the HBD-o-sphere worship Alpha males and are totally ashamed of their own nerdiness.  I find this annoying because back when I was in high school (I’m now in my 30s) I was somewhat popular with the “cool” kids because they loved my impersonations of the teachers, but I always wanted to hang out with the nerds.  To me nerdiness represented intelligence.  I viewed nerds as more highly evolved and genetically superior.  The problem was I don’t look like a nerd, and nerds were interested in talking about HARD sciences and science fiction, and I was interested in the social sciences and horror films.

But it’s not surprising that nerds feel inferior to “alphas” because according to J.P. Rushton’s theory, as humans became more evolved, they developed a K reproduction strategy (lower birth rates but higher survival rates) and with that came lower self-esteem, because if you only mate with one woman, you don’t need the ego to pursue numerous partners.  Further, as humans migrated North, there was more need for technological intelligence to build shelter, tools and clothing and less need for the social IQ to pickup women, so the social part of the brain began to shrink, to make room for more technical processing.

The low self-esteem combined with scrawniness, glasses and social obtuseness makes nerds feel they can’t score with women  but it doesn’t have to be that way.

Economist Peter Orzag is an example of a guy who is a complete stereotypical nerd, yet always has a gorgeous woman on his arm, and is ranked by the media as one of the sexiest guys in Washington.

Any dude who can snag ABC newscaster Bianna Golodryga while banging wealthy shipping heiress Claire Milonas, and running the country’s budget is a man.

This must infuriate the dumb jocks who probably shoved him in his locker in high school. 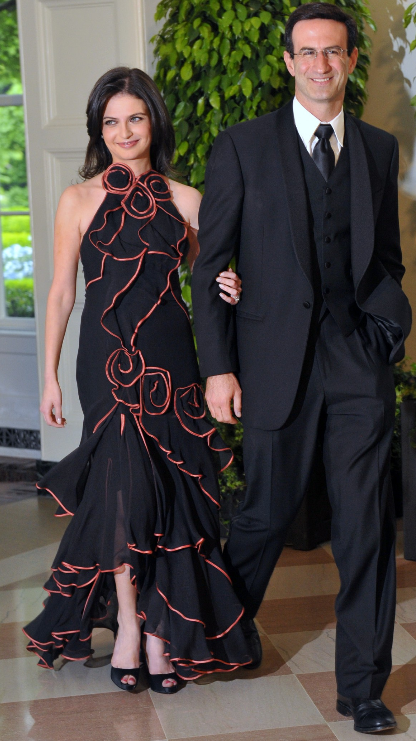 One reason women like him is that he’s extremely self-confident, and women don’t expect that from a nerd so they’re pleasantly surprised.  If you’re a nerd, a little bit of alpha goes a long way.

I’m friends with a guy who despite being tall and athletic, never had much success with women.  One Halloween he was desperate for a costume so he dressed up like a nerd with exaggerated glasses and a pocket protector.  To my utter astonishment, women at the very upscale bar we were at could not stop hitting on him.  It occurred to me that women grade guys on a curve.  When he was a jock he was only average in height and athleticism for a jock so women ignored him, but when he became a nerd he was in the top 10%.