[NOTE: Pumpkin Person does not endorse the SAT (old or new), as a great measure of IQ, BUT, if one wants to express their old SATs on the IQ scale, here are simple ways of doing so] 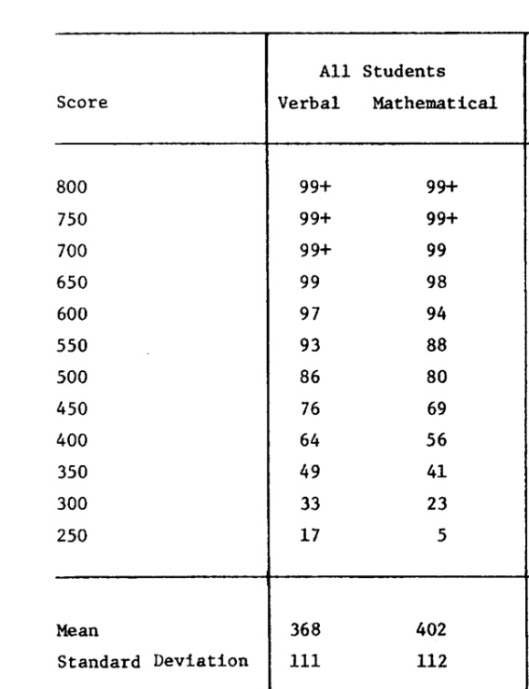 Thus converting old SAT verbal and math scores into IQ equivalents (U.S. norms) was simply a matter of converting them to Z scores, then multiplying by 15 and adding 100.

Now what happens if you want to convert the composite old SAT score (verbal + math) to IQ.  Well we know the mean score if all Americans had taken the test would have been about 770 (the mean verbal + the mean math), but we don’t know the standard deviation.

On page 779 of the book The Bell Curve by Herrnstein and Murray, they cite the formula for calculating the standard deviation of a composite score.

Hoeflin has argued that even though only a third of U.S. teens took the SAT,  virtually 100% of teens capable of scoring extremely high on the SAT, did so, and whatever shortfall there might be was negated by bright foreign test-takers.

However above 1560, the formula seems to yield IQs that are too low, given their actual rarity.  This is because people who scored above 1560 typically hit the ceiling on the math section and approach the ceiling on the verbal, so people capable of scoring well above 1600 if the test had more hard items, tend to cluster in the high 1500s.