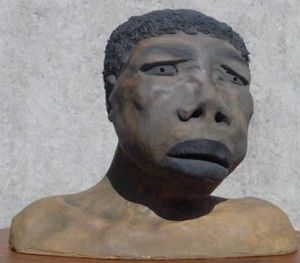 [Update pumpkin person, Nov 6, 2016: Commenters exposed a mistake in this article, which I indicated as corrected via a crossed line through the original error]

When the prudish Victorians first discovered the Bushmen, they were disgusted by the obscene levels of nudity, enormous genitalia, elongated labia, and colossal secondary sexual characteristics like breasts and buttocks.  For this, the Bushmen were punished, humiliated and exploited. One Bushwoman nicknamed the Hottentot Venus was paraded in front of circus goers and laughed at.

Victorians already looked down on blacks for living in a land full of apes and for being the color of darkness, but when you added what was seen as such depraved over-the-top sexuality to the mix, many felt the entire Negroid race needed to be punished, and racism became especially viscous.

Today many African Americans are disgusted by how their bushwoman sister was treated, but some, like hip-hop community, continue to degrade black female sexuality for the entertainment of white suburban teenaged boys.  Indeed sexual icon Beyoncé can so relate to the hotentot Venus that she wants to play her in a movie.

Morphologically, the bushmen were considered an extreme form of Negroid, and Cavalli-Sforza also lumped them into the Negroid race based on lineage.  Yet new lineage research suggests the incipient Negroid race may have split into two at a far earlier date than Cavalli-Sforza may have thought.  According to the West Hunter blog:

The Bushmen (and probably African Pygmies as well)  apparently split off earlier than any other human population, something like 200,000 years ago. Some Bushmen among the Ju’/hoansi, show low or even zero admixture with other groups.  How they managed to have so little gene flow with other Africans for such a long time is a mystery to me, but that’s what the stats say…

This long separation doesn’t necessarily mean that Bushmen ave the most divergent phenotypes (although thinking about it, they probably are, what with steatopygia , the tablier egyptienne, etc)  – strength and direction of selection are important, not just time.  But all else equal, more time allows greater changes.

This doesn’t mean that the Bushmen are what early homo sap was like – they’ve been evolving too – but we ought to be able to learn quite a bit about changes over the past couple of hundred thousand years by investigating  genetic differences between the Bushmen and everybody else.  For example, 200 k years ago, our ancestors didn’t have what it takes to out-compete Neanderthals and other archaics on their home grounds, judging by the fact that they didn’t manage it back then.  By 40k years ago we could and did – but that isn’t necessarily the case for Bushmen, a separate branch. Although, since Bushmen and Pygmies seem to have picked up a few percent of their genome from some very divergent group of archaic humans, perhaps they too developed the ability to kick archaic ass. But we don’t know if they did it in the same way, and it probably happened in fairly familiar African environments, instead of ice age Eurasia.

So what are their IQs?

In his 2006 book Race Differences in Intelligence, scholar Richard Lynn shocked the World by claiming Bushmen had an average IQ of only 54.  To put that in perspective, the average white has an IQ of 100.  IQs below 70 are considered EMR (Educable (mild) Mental Retardation) and IQs below about 55 are considered TMR (Trainable (moderate) Mental Retardation).  So to describe the IQ of an entire sub-race of people as TMR was shocking indeed.

The IQ of South Africa’s Coloureds

Since dark caucasoids have a genetic IQ of around 90, and since largely the dumbest Indians probably became indentured labourers in South Africa, it can be assumed that South African Indians have reached their genetic IQ.  And since, like the Coloureds, the whites would give them good environments so that they would side with them against the native blacks, the Coloureds have probably also reached their genetic potential with an IQ of 83.  The whites in South Africa score 94, somewhat lower than the Northwestern European mean of 100, perhaps because largely the most racist whites colonized and stayed in South Africa.

In a recent post I blogged about Richard Klein and Spencer Wells’s theory, that sometime around 70,000 years ago, there was a sudden genetic change in Africa that produced behavioral modernity and allowed humans to spread all over the globe, replacing their archaic cousins like the Neanderthals with epic speed.  Several readers expressed skepticism about such a sudden change in behavior, but if experts as respected as Klein and Spencer believe it, there’s probably some truth to it, even if the theory has been exaggerated.

I now believe the huge 10-15 point IQ gap between Bushmen/pygmies and other “blacks” (i.e. congoids and australoids) perfectly preserves this sudden jump like a living fossil record.  Prior to about 70,000 years ago, all modern humans probably had a genetic IQ similar to Bushmen (about 70) and then around 70,000 years, something snapped, and the genetic IQ was raised to 80 (australoid level) producing behavioral modernity.

Those behaviorally modern humans who stayed Africa, evolved a bit more to IQ 85, but those who faced the tough struggle of the ice age, evolved well into the triple digits in some cases.

Meanwhile the Bushmen and pygmies achieved only anatomical modernity.  Behavioral modernity never came, partly explaining why the never acquired agriculture liked the Congoids, let alone developed it like the Australoids.

29 thoughts on “The genetic IQ of Bushmen”