[Note from PP, April 8, 2017: The views expressed in this guest post do not necessarily reflect the views of Pumpkin Person.  Out of respect for the author, please try to keep all comments on topic.  I understand conversations naturally evolve, but all comments should at least start on-topic. UPDATE April 9, 2017: after consulting with the author, a few minor edits were made] 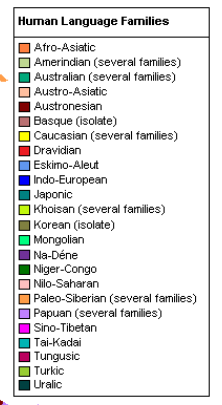 I’m introducing you to this map of language families to show you how complex it is to classify human populations. Of course, language is not really genetic in the sense that we don’t need a specific genotype to speak a specific language. Nevertheless, many language families are closely related to mtDNA and Y chromosome haplogroups and reflect prehistoric migrations.

As you can see from the complexity of language families and population genetics as a whole, there is no such thing as humans branching off a main route. Instead, we should picture a gas, spreading across planet earth, with particles randomly moving back and forth then blending with other currents. As a result, no population can be defined by genetic markers or traits that are both exclusive and universally shared by its members and geographical proximity is the strongest correlate of genetic similarity between two populations. Any cluster, cline or “race” is chosen arbitrary, without a threshold of genetic dissimilarity that justifies separation.

Although language is not purely genetic, this very human ability shows an actual instance of Human BioDiversity that no HBDer ever touched to my knowledge: the genetically-driven inclination to tonal or non-tonal languages. From Wikipedia:

A new allele (version) of ASPM appeared sometime between 14,100 and 500 years ago with a mean estimate of 5,800 years ago. The new allele has a frequency of about 50% in populations of the Middle East and Europe, it is less frequent in East Asia, and has low frequencies among Sub-Saharan African populations.[10] It is also found with an unusually high percentage among the people of Papua New Guinea, with a 59.4% occurrence.[11]

The mean estimated age of the ASPM allele of 5,800 years ago, roughly correlates with the development of written language, spread of agriculture and development of cities.[12] Currently, two alleles of this gene exist: the older (pre-5,800 years ago) and the newer (post-5,800 years ago). About 10% of humans have two copies of the new ASPM allele, while about 50% have two copies of the old allele. The other 40% of humans have one copy of each. Of those with an instance of the new allele, 50% of them are an identical copy.[13] The allele affects genotype over a large (62 kbp) region, a so called selective sweep which signals a rapid spread of a mutation (such as the new ASPM) through the population; this indicates that the mutation is somehow advantageous to the individual.[11][14]

Testing the IQ of those with and without new ASPM allele has shown no difference in average IQ, providing no evidence to support the notion that the gene increases intelligence.[14][15][16] However statistical analysis has shown that the older forms of the gene are found more heavily in populations that speak tonal languages like Chinese or many Sub-Saharan African languages.[17]

So we have this genetic tendency for tonal languages that varies across populations, but once again, it’s not race. We don’t need a specific genotype to learn a tonal or a non-tonal language, it just happens that a high frequency of an allele in a population will lead to keeping or losing tone in a language. Moreover, many language families are multiracial and most races are divided in many language families, some of them being racially overlapping.

Looking back to the loss of tonal language and the emergence of writing and agriculture and then civilization, I had a realization: tonal languages are extremely difficult to write because they have too many homophones, see that famous Chinese story below:

“There was a poet named Mr.Shi who lives in a stone den. He liked to eat lions, and vowed to eat ten lions. Therefore Mr. Shi would usually visit the market to look for lions. At 10 o’clock exactly ten lions just arrived at the market. At that very moment, Mr.Shi shot a few arrows from his bow and killed those ten lions. Mr. Shi then brought the ten dead lions back to his stone den. Because the den might be too wet to store the lions. So he ordered his servant to clean and dry the den. After the den was cleaned, Mr.Shi started to try to eat those ten lions. However, only until he was eating the lions he found out that those ten dead lions were actually ten stone lions. Would you try to explain what was happening?”

The Chinese script has probably handicapped China’s technological development since it is highly inconvenient in printing, similarly to Arabic or South Asian languages. Sub-Saharan Africa is also an area of tonal languages and it’s only ancient indigenous writing system, the Nsibidi, looks like early Chinese scripts. Non-tonal speakers in Africa quickly adopted and modified West-Asian scripts however, Muslim West Africans developed Ajamis from Arabic and Ethiopians created the Ge’ez from ancient South-Arabic scripts.

Due to the difficulties associated with writing tonal languages, it makes sense that losing them was an advantage in developing writing systems, the mothers of all subsequent technological and cultural innovations.

Anyway, back to our world map of language families, the intent of this piece was to show that whatever the variable we consider (language being the closest to mental traits that could impact a population’s intelligence, namely verbal IQ) it is impossible to strictly divide mankind into races in the way we divide dogs and cats in breeds.

Last but not least: I hope this very factual post with clearly announced speculations will sound like a lesson of HBD to some people.

486 thoughts on “Population genetics and language, by Afrosapiens”