One might wonder how a man like Ron Hoeflin (who had very little income or power) was able to create a test that measured one in a million level U.S. intelligence. After all , wouldn’t you need to administer a test to several million Americans to reliably estimate how well a one a million mind would perform?

But the clever Hoeflin found a shortcut called equipercentile equating, and when I first heard about it a couple decades ago, it blew my mind. Hoeflin didnt need to give the Mega Test to millions of people because millions of people had already taken the SAT, so all Hoeflin had to do was ask people who took his Mega Test to reveal their SAT scores. Assuming they didn’t lie or selectively report, it was simply a matter of equating the distribution of Mega scores with the distribution of SAT scores and then equating a one in a million SAT score (perfect 1600 pre-1995) with its counterpart in the Mega score distribution.

The Prometheus MC Report explained it as follows:

If one assumes that raw scores on the Mega and the SAT are monotonically related to mental ability, i. e., that a higher raw score on either test correlates with higher mental ability, then there is some function z1(n) that relates raw scores on the Mega to standard intelligence scores z and there is some function z2(m) that relates raw scores on the SAT to standard scores z, where z = (IQ-100)/16. It is plausible to assume that the joint probability distribution of z1 and z2 is just the bivariate normal distribution p(z1,z2,r) for some correlation r. This function is symmetric in z1 and z2. Thus, for any random sample for which raw scores exist for both the SAT and Mega, if we have n scores with z1 > 4, then we would expect n scores with z2 > 4. These would not generally be the same n individuals in each case. Thus, if we know the 1-in-30,000 cutoff on the SAT (raw score=1560), and if there are N people in the sample of people taking both the SAT and the Mega scoring at this level or higher on the SAT, then counting down the highest N Mega scores from the sample would give a reasonable estimate of the 4-sigma cutoff on the Mega (raw score=36). Ron Hoeflin showed that, if you do this for several different cutoffs, then the resulting Mega normalization is linear over a range of scores including 36. This linearity feature seems to be standard on IQ tests over their range of applicability.

We are aware that there are difficulties in this argument (e.g., with respect to self-reporting of SAT scores, nonrandomness of sampling, small sample sizes, and mathematically allowed but “unphysical” test scores associated with ceiling effects).

To this day I have no idea what “unphysical” test scores are by they sound fascinating!

In my opinion equipercentile equating only works if (1) both tests being paired are more or less equally correlated with g (or some other factor(s)), and (2) the people in your sample were not selected by one of the tests being equated. So if your sample were Harvard undergrads, you wouldn’t want to equate Mega scores with SAT scores because the undergrads were selected by the SAT and thus would be expected to regress to the mean on any other test they take. Much better to equate their LSAT scores to their Mega scores.

Equipercentile equating the PATMA & the WAIS

I noticed that at least six commenters had reported both their PATMA and WAIS scores.  The first two columns of table 1 rank the commenters by their PATMA scores.  The second two rank them by their WAIS scores.  This side by side ranking allows us to equate PATMA scores with their WAIS equivalent.  In some cases commenters took a version of the WAIS over a decade after its norms were published so scores might be inflated by a few points because of the Flynn effect.

Although the sample size is small,  preliminary data suggests an absurdly high correlation between the two tests (r = 0.94!).  Indeed the line of best fit predicts: 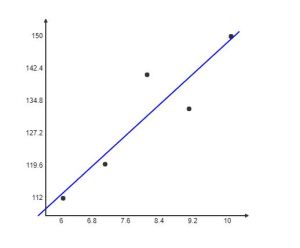 Instead if we graph the data by score of equivalent rank (rather than scores made by the same person) it seems the PATMA has an incredibly linear relationship to IQ (r = 0.9975) expressed by the equation: 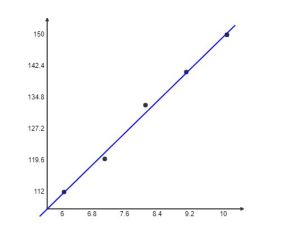 Note the subtle distinction between formulas.  The first is telling us the expected WAIS IQ of someone with a given PATMA score.  The second is telling us what WAIS IQ you’d get if you performed as well or as poorly on the WAIS as you did on the PATMA.

Notice that only two people in this extremely bright sample scored a perfect 10 on the PATMA and only two people also scored 150+ on the WAIS (incidentally the same two people).  This suggests a perfect 10 on the PATMA equates to about a 150 IQ (+3.33 SD) however this is a conservative estimate because Teffec P suspects his PATMA score might have benefited from reading this blog (teaching to the test) and his WAIS score was likely suppressed by ceiling bumping (his median scaled score was the highest possible scaled score and much higher than his mean scaled score).  Correcting for this suggests that on a ceiling-free WAIS he would have scored 164.  So if his PATMA score is too high and his WAIS score is too low, than we get a very different equivalents:

However for now I’ll stick to the flawed but real data in table 1 rather than the speculation that is table 2.