Using data cited by iconic blogger Steve Sailer, I calculated the Wealth AQ of every American racial group for which I have IQ data.

The problem is, when I used the above six data points to build a regression equation predicting Jewish IQ from their Wealth AQs of 17.88, I got a ridiculously high average IQ 250!

I then calculated the regression line of best fit predicting ethnic mean IQ from its natural log Wealth AQ: 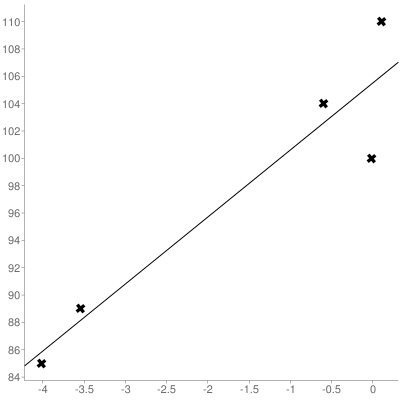 The regression equation is:

The Jewish Wealth AQ is 17.88 which has a natural log of 2.88.  Entering 2.88 into the above formula gives Jews an expected mean IQ of about 120.  This is a far more reasonable estimate than the ridiculous 250 I got before I reduced Wealth AQs to their natural logs, and shows the advantage of using natural logs when dealing with abnormal distributions.

Indeed an IQ of 120 is pretty close to the actual average verbal IQ of Ashkenazi Jews.