Scientist Richard Lynn divided humanity into ten races:  East Asians, Whites, Arctic people, Southeast Asians, Pacific islanders, Non-white caucasoids, Native Americans, Congoids, Australoids, and Capoids.  By correcting for the malnutrition that many of these races experienced, particularly in the Third World, I was able to estimate the genetic IQ of each race.   Beside the genetic IQ of each race, I have listed the ancestral climate each race experienced during the Wurm glaciation as cited in Lynn’s 2006 book, along with how evolved each race is, and whether it was geographically isolated:

Sadly cold winters killed off people who were too dumb to adapt to them, leaving largely those with high IQ genes as the survivors.  I’m shocked I have to convince people of this.  It’s common sense.  If you’re dumb you’re going to freeze to death.  If you’re smart you’re going to adapt by making clothes, shelter and fire.  And yet we have a few fairly high genetic IQ races (Southeast Asians & Pacific Islanders) from extremely warm climates.  What’s their secret?  Their secret is they’re highly evolved.  As the chart below shows, there were a whopping four splits in the human evolutionary tree before these two races emerged: 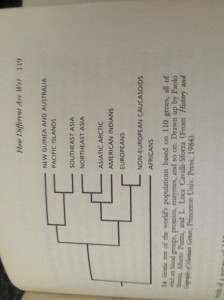 And yet Arctic people have an average IQ of only 91 despite being both extremely cold adapted and extremely highly evolved.  What explains this?  Isolation.  Far away in the frozen Americas, Arctic people had no contact with the mainstream of human evolution, and thus when new IQ boosting mutations occurred during the post-agriculture population explosion, those alleles never reached the Arctic people.  Nonetheless intense natural selection for greater IQ made their brains super large, but without the new mutations of the last 10,000 years, their IQs gradually fell behind smaller brained races like whites.  The importance of geographic isolation in determining racial IQ was perhaps first noted by scholar E.M. Miller in 1996.

And so it seems three variables, ancestral temperature during the Wurm glaciation,  geographic isolation, and number of splits on the evolutionary tree, collectively caused the average IQs of the ten races.  Indeed the following formula I made, estimates the average genetic IQ of a race from these variables: