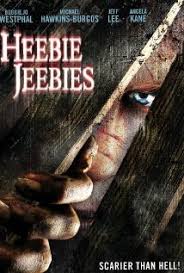 This is turning out to be one of the best Halloweens in years. Yesterday I went out and got drunk out of my mind and this evening I’m having a quiet night at home watching horror films on a gorgeous high definition huge screen TV (which is the only way to watch horror), one of which is Heebie Jeebies. Shockingly IMDB (which I usually agree with) currently only rates this film 3.2 out of 10. I couldn’t disagree more

While this film is no masterpiece, it contains one of the scariest moments I have ever seen. A guy plays a prank on his sister, convincing her that all their friends are being murdered as she cowers in terror under a curtain in the basement. After the prank is over, the guy pulls the curtain to check that his sister was not too traumatized by the prank. At first his sister is catatonic; too traumatized by the prank to even speak. All her friends get up to reassure her that they’re not really dead; it was just a joke and that the blood they have splashed all over themselves is fake. Finally getting the joke, the guy’s sister begins to laugh. The brother finds this reassuring.

But then she begins to laugh just a little too hard, and then she grabs a pair of garden shears, and cuts her brother’s head off.

This has got to be one of the scariest scenes in movie history and one that will haunt me for the rest of my life. Here’s the trailer: